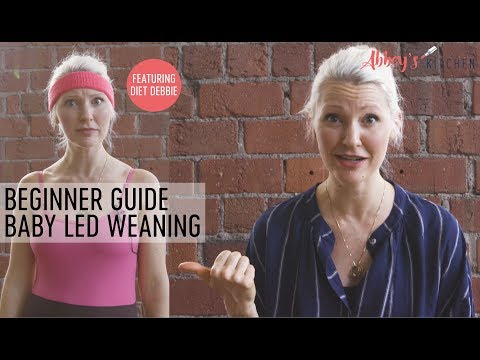 Medical Disclaimer:
The content in this video is not intended to be a substitute for professional medical advice, diagnosis, or treatment. Always seek the advice of your physician or other qualified health provider with any questions you may have regarding a medical condition.

In this episode of Abbey’s Kitchen, Abbey is joined by Debbie who is ready to start introducing solids to her baby and wants to learn about Baby Led Weaning.

Baby led weaning is a method of starting solids where handheld finger foods are introduced to babies rather than the traditional spoon-fed purees. This means, the parent decides on what, when and where the infant will eat and the infant decides how much and whether they want to eat at all.

Debbie wants to know how to make sure that they’re getting the right nutrients, like iron.

As a parent, your role is to introduce those iron rich foods to them and they will likely try all of those foods that they’re exposed to. There are a ton of baby led weaning foods that are rich in iron like fortified cereals, meats, egg, sweet potato and beets, so make sure those are in abundance at meal time. A study compared baby led weaners and babies fed purees and found that there was no difference in iron status, meaning no group got more iron compared to one another.

What about growth? Will your baby get enough food at meal time, if they’re in charge of eating independently?

Studies have found that there was no difference in BMI between baby led wearers and babies fed purees.

What about overfeeding? Can it happen?

One study found that BLW infants had a lower risk of obesity because they’ve practiced self-regulation from a younger age. It’s your job as a parent to know when your babe is full.

Does your babe even have the skills to do this at such a young age? Like pick up foods and bring them to their mouths?

As they learn to self-feed themselves, you’ll start to see improvements in their dexterity and hand eye coordination.

When can you start baby led weaning? Four months?

Based on the research, most babies aren’t ready until 6 months, because they aren’t developmentally ready and they may be at a high risk for choking. Know the signs that your baby is ready for solid foods.

By Best Baby Care Tips on
gross motor skills for infants lay the foundations and abilities for your baby to perform the larger movements like rolling and crawling. In this article we are going to cover everything you need to know about your baby's motor skills. We look at what they are and why they are so important to develop.
Read more

Baby Rolling Over in Sleep

By Best Baby Care Tips on
What to do if Your Baby Rolls Over in Their Sleep - Don't Panic! Rolling over is a major milestone in any baby’s development. It can be an exciting time for parents, however it can also raise some justified concerns. Rolling over means that the baby can now change positions during the night resulting in […]
Read more

Baby Not Rolling Over at 6 months

By Best Baby Care Tips on
If you are a parent that is concerned about your baby not rolling over yet - you are not alone. It's a common misconception that babies are meant to develop skills and reach milestones by target ages.
Read more